At church, yesterday, during our pre-service prayer time, we got into a short conversation about the joy of the Lord that is available to us even in the face of circumstances that aren’t particularly joyful here on Earth.

Suddenly, the old song “Joy Unspeakable” came to my mind, and I asked if anyone knew it. One of the others did, and we sang a quick chorus. The others had never heard it. The one who did know it, didn’t know that it actually came from scripture, so I made a quick mental note to look up the scripture at home, and we went on with our prayer time. 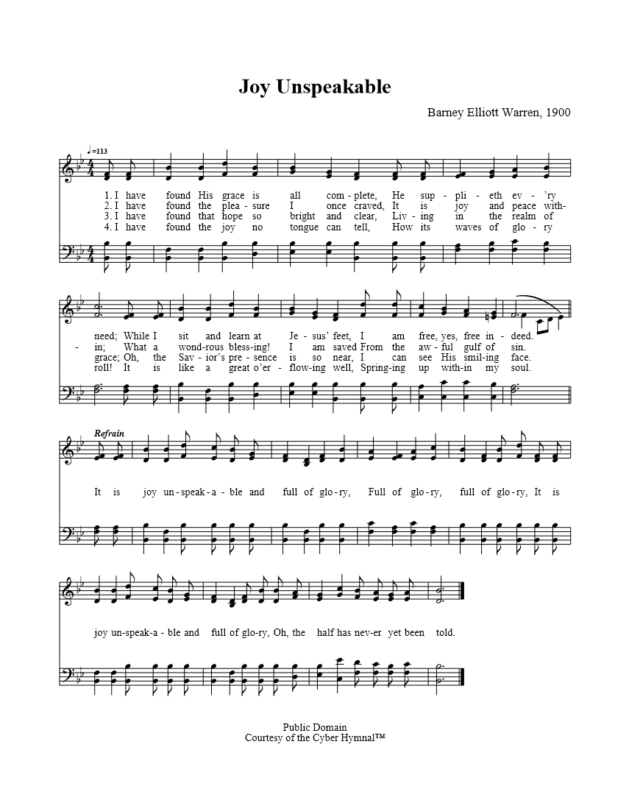 If you’d like to download the (free, Public Domain) sheet music, you can find it (from hymnary.org), by clicking the thumbnail at the left.

Note that this is THE ORIGINAL, and the words in the verses are different than in the recording above. There are other versions available, as well, since it’s been in the Public Domain for many years.

This morning, when I awoke, I realized that the song had been running through my head all night long. So the first thing I did as soon as I was fully out of “sleep mode,” was to look up the scripture, so that I could write this devotional article.

As I read through the designated scripture after my initial search, I realized there was something quite interesting about the intro of the letter being sent to the early Christians from “Peter–an apostle of Jesus Christ” as a “Greeting to the Elect Pilgrims,” that I had a feeling would play into a higher understanding of why that particular letter was sent to those particular people.

The scripture is:
1 Peter 1–(NKJV) BibleGateway

Let’s take a look at that chapter written as you might see it in today’s usage of the English language.

Greeting to the Elect Pilgrims

1-2)
Peter, an apostle of Jesus Christ, to the sojourners/pilgrims/temporary residents of the Dispersion in Pontus, Galatia, Cappadocia, Asia, and Bithynia–elect according to the foreknowledge of God the Father, in sanctification of the Spirit, for obedience and sprinkling of the blood of Jesus Christ: Grace to you and peace be multiplied.

3-5)
Blessed be the God and Father of our Lord Jesus Christ, who according to His abundant mercy has begotten us again to a living hope–through the resurrection of Jesus Christ from the dead–to an inheritance imperishable, incorruptible, and undefiled–that does not fade away–reserved in Heaven for you who are kept by the power of God through faith, for salvation ready to be revealed in the last time.

6-9)
In this, you greatly rejoice (though now for a little while, if need be, you have been distressed or grieved by various trials) that the genuineness of your faith—being much more precious than gold that melts when it is tested by fire–may be found in you, as you praise, honor, and bring glory to God due to the revelation of Jesus Christ–whom having neither seen nor known, you love. Though now you do not see Him (yet you believe) you should be celebrating with joy inexpressible [unspeakable] and full of glory–already receiving the goal of your faith: the salvation of your souls.

NOTE: This passage is speaking about the “genuineness of your faith” being “more precious than gold that perishes.” It is NOT saying that PEOPLE are tested by fire, but that if one truly is walking in FAITH IN GOD, that faith will survive and thrive–proving to be even more valuable than physical gold that can be melted into ingots and subsequently made into coins–since that faith is regarding the salvation of God’s people–not by the Law, but by God’s grace, since Jesus has already been shown to carry out the OT prophecies and to have FULFILLED the Law. Therein, this scripture applies to ALL WHO BELIEVE…not just to the scattered Jews to whom Peter was expressly writing.

10-12)
Of this salvation, the prophets have inquired and searched carefully (prophesying of the grace that would come to you) regarding what (or what manner of time) was meant by the Holy Spirit, when He testified beforehand of the sufferings of Christ and the glories that would follow. To those prophets, it was revealed that (not only to themselves, but to you and to all of us) they were ministering the things which now have been reported to you through those who have preached the gospel to you by the Holy Spirit sent from heaven—things which even the angels desire to look into.

Living Before God Our Father

13-16)
Therefore, gird up the loins of your mind, be sober, and rest your hope fully upon the grace that is to be brought to you at the revelation of Jesus Christ, as obedient children (not conforming yourselves to the former lusts, as in your ignorance, but as He who called you is holy, being holy in all your conduct) because it is written, “Be holy, for I am holy.”

17-21)
Plus, if you call on the Father (who without partiality judges according to each one’s ways) knowing that you were not redeemed with perishable or corruptible things like silver or gold, conduct yourselves throughout your time of dwelling as resident aliens here, respectably–rather than in your aimless conduct received by tradition from your fathers–because of the precious blood of Christ (as of the Lamb without blemish and without spot) who was, indeed, foreordained before the foundation of the world, but whom was revealed and manifested in these last times for you (who, through Him believe in the God who raised Him from the dead and gave Him glory) may prove to all, that your faith and hope are in that same God.

(22-24)
Since you have purified your souls in obeying [these] truths, in non-hypocritical and sincere love of the brethren be sure to love one another fervently with a pure heart, because you have now been born again—not of perishable or corruptible seed, but through the non-perishable and incorruptible, living Word of God. Remember, all fleshly things are as grass which eventually withers, and the worldly glory of man is as flowers that eventually fall away. The Word of the Lord, however, endures forever. THIS is the Word, which (by the gospel) has been preached to you.

What caught my eye in that first section, were the things that I marked in color. So I started looking up the Greek etymology [the history of a linguistic form (such as a word) shown by tracing its development since its earliest recorded occurrence in the language where it is found, by tracing its transmission from one language to another, by analyzing it into its component parts, by identifying its cognates in other languages, or by tracing it and its cognates to a common ancestral form in an ancestral language] of those particular words.

sojourners/pilgrims/temporary residents of the Dispersion…
I wasn’t concerned, actually, with the meaning of sojourners or pilgrims, which I already knew meant “temporary residents,” which could mean anything from vacationers, to students, to people in exile. I WAS interested, however, that the term was connected to “the Dispersion,” because it seemed to be about a PARTICULAR dispersion…not just people who had made individual decisions to travel, as a whim, to somewhere other than their cities of birth or occupation.

I found that the word “dispersion” is the Greek word “diasporus” [διασπορᾶς] which means, “a SEPARATION or a SCATTERING of SEED.” The fact that Bible translators (for most versions) have capitalized the word, is significant, indicating that they believed the original Greek WAS referring to a particular dispersion EVENT, or something ABOUT that event, and that the event was in reference to a particular SEED, which was, in fact, the news that Jesus truly was the Messiah, and He had proved it through his death and resurrection–which news had previously been sent to all Jews who were abroad at that time.

In this case, it would seem that the particular (capitalized) term would probably NOT be simply referring to the fact that Peter was speaking to the particular people in those particular spots on the map, simply because they were Jews who might be temporarily living there, thinking that they might have missed something that the other Jews who were still living at home had received.

Instead, he was sending a clear and definite message to all of those people, that they were being expected to be behaving circumspectly, bringing honor to the Triune God–notice that he referred to all three parts of the Godhead at several junctures. It’s pretty clear that Peter knew that they had previously received the message of what had occurred with Jesus’ death and resurrection, and what that meant to the Jews and all others who would subsequently believe.

He was reminding them that the previous message(s) they had received were THE TRUTH, and that their behavior while in their temporary living places should fully be HONORING that truth–just as if they were living among their brethren in their homeland. Part of that behavior would be the work of SPREADING the gospel, themselves–further DISPERSING THE SEED.

With all of that in mind, I got curious about the destinations that were mentioned, to which Peter had intentionally “mailed” his letter (In my mind, I see “flyers” being delivered to each of the mentioned cities/areas, which were then shared with the temporary residents.) So I started looking them up, noting that all of the locations were at the Black Sea.

I found a very interesting source of historical study regarding three of these places, but finally had to revert to the WIKI for the other two. I’ll leave you to go and read about them. I think you might enjoy going down these “rabbit holes.”

Personally, I found some fascinating connections with WHY Peter might have been adjoining the Jews who had been given the news of salvation by grace, through faith, to stand up and stand out among crowds of people doing exactly the opposite. I find this very apropos for our current state of world affairs, as well.