The man in this painting was drawn, and then painted, from a picture I had seen in an old Ideals Magazine. If you aren’t familiar with those, here’s a Google search page for images showing it.

My mom and dad used to subscribe to the magazine (I don’t know if you can still do that, or if you just have to buy them separately these days). I always loved poring over all of the beautiful photos inside. When I married (the first time) and left home, my mom gave me a bunch of her old ones. I still had them until we made the move from California to Washington State, in 1992, shortly after I painted this.

Everything in the painting except for the man himself is totally my own invention. The painting was actually done using a mix of oils and acrylics, while I was still learning from William Alexander and Bob Ross videos on TV. Everything except the man’s face was painted in oils. Because I felt more confident in doing the facial details in acrylics, I masked off the face while painting the oil parts, then pulled off the masking to paint the face after the oils were dry.

I still have this painting, and it’s framed beautifully with a box-type frame lovingly crafted by David in 1994. I couldn’t get a good picture of the whole thing, but you can see the color of the frame around the edges of the photo. The “mat” is another masked area. I first covered the entire canvas in black gesso. After it was dry, I covered the entire surface with contact paper, then cut out the shape of the mat. Once the oils were dry, the contact paper was removed (at the same time I removed the mask over the man’s face).

If I were going to do this same scene, now, I’d add some shading inside of the mat, to make it stand out in more of a 3D manner. I’ve learned a lot more about THAT, by doing digital artwork since then. 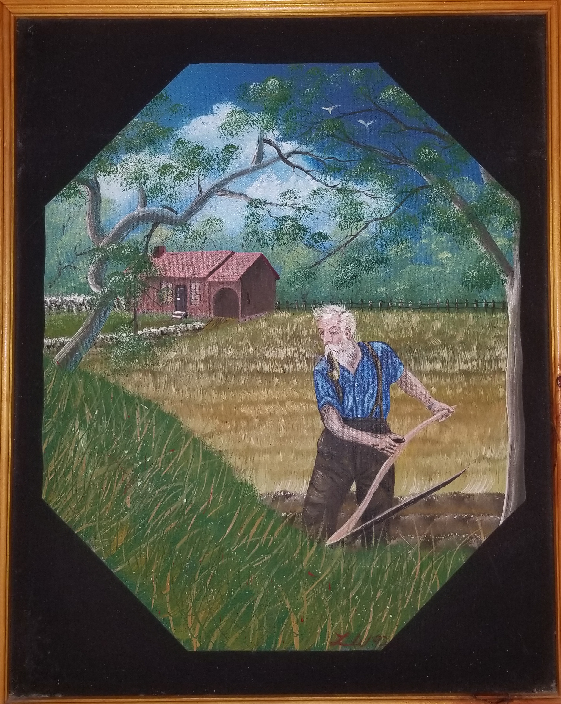 4 Replies to “Farmer and Scythe”