As with the painting “Farmer and Scythe,” this man was found in an Ideals Magazine. When I drew him, in 1994, a couple of years after we moved to Aberdeen, Washington, I totally meant to get my paints out and create a companion for the farmer in that painting, but it never happened.

I still have the original drawing, and I still have my paints, easel, and all of my brushes, etc. I’ve been wanting to get back into painting (haven’t done any of it since we moved to South Dakota in 2009). Perhaps, now, I will get really inspired and make it happen! 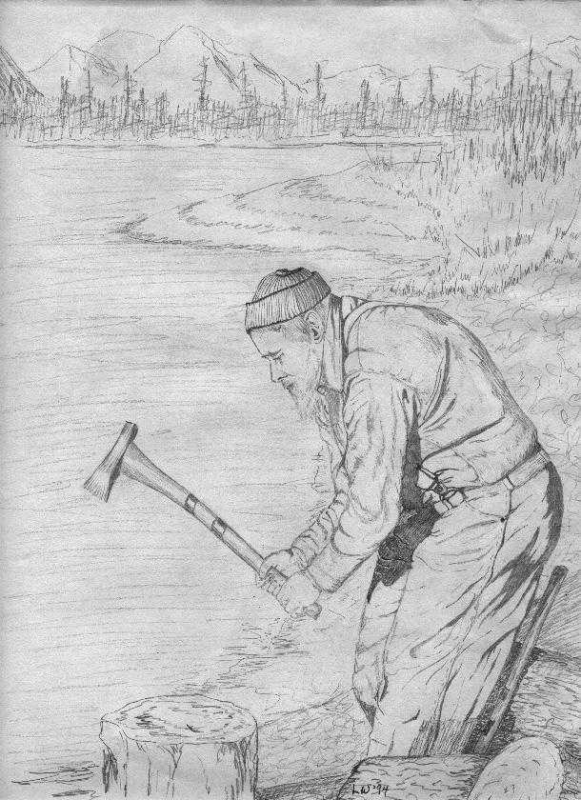 I was either 44 or 45 when I drew this. As you can see, I had progressed quite a lot with textures since drawing the picture of my baby Jackie when I was 25. On the other hand, I never did get that axe head right! I’ve always thought that though the figure of the man shows the power he would have been wielding, the axe itself looks like it was pretty wimpy. That would be because I invented the axe and everything else in the drawing, except for the man. I wanted him to look like an Alaskan pioneer who had maybe built his own cabin out of logs, and was using some of the leftover pieces for firewood. I did have a picture of the axe to go from, but I think  it was a catalog image…no life to it, at all. If I ever paint this, maybe I can do a better job with that. 😀