In 1964, Alaska had a huge earthquake (I will be posting a story about that). Before the quake, I lived in Valdez. After the quake, I stayed for several months with friends in Fairbanks. While there, I got to see TV shows about my favorite musicians at the time, whom I’d only ever heard on the radio. I also spent a lot of time reading fan magazines, like any other teenager at the time.

Being an artist already (I learned from both my mom and dad…more stories coming, about them and my life growing up), I naturally turned to sketching them. I drew this one (my signature at the bottom says “Linda Minish,” which is my maiden name) and mailed it to my grandmother in Aberdeen, South Dakota [edited to the correct location…thank you, Jen], who kept it in her collection of things from her grandchildren, until she passed away.

My mom received it after Grandma died, and later returned it to me. I’m not sure if I have the original anymore (we’ve moved around quite a bit since then, and I may still have it in an unpacked box somewhere), but thankfully I scanned it some years ago, so now I’m sharing it with you.

You’ll notice that I had some distinctive handwriting at the age of 14. I laugh at it, now, but I was very serious about stylizing it at the time. You’ll also notice that I had some problems with confidence in myself OR my art, and I wrote on the picture, before sending it to Grandma, telling her which ones she should like or dislike. I doubt that she followed my instructions.

As a grandma, myself, now, I totally would not judge this picture the same way I had thought she should! 🙂

NOTE: (showing my lack of confidence, still) I noticed, just now, that these portraits actually look like I might have traced them from somewhere, but I assure you I did not. I simply hadn’t yet developed much of a knack for showing lines by shading, rather than by outlining. I really didn’t learn that very well until I began to paint…but that’s yet another story. 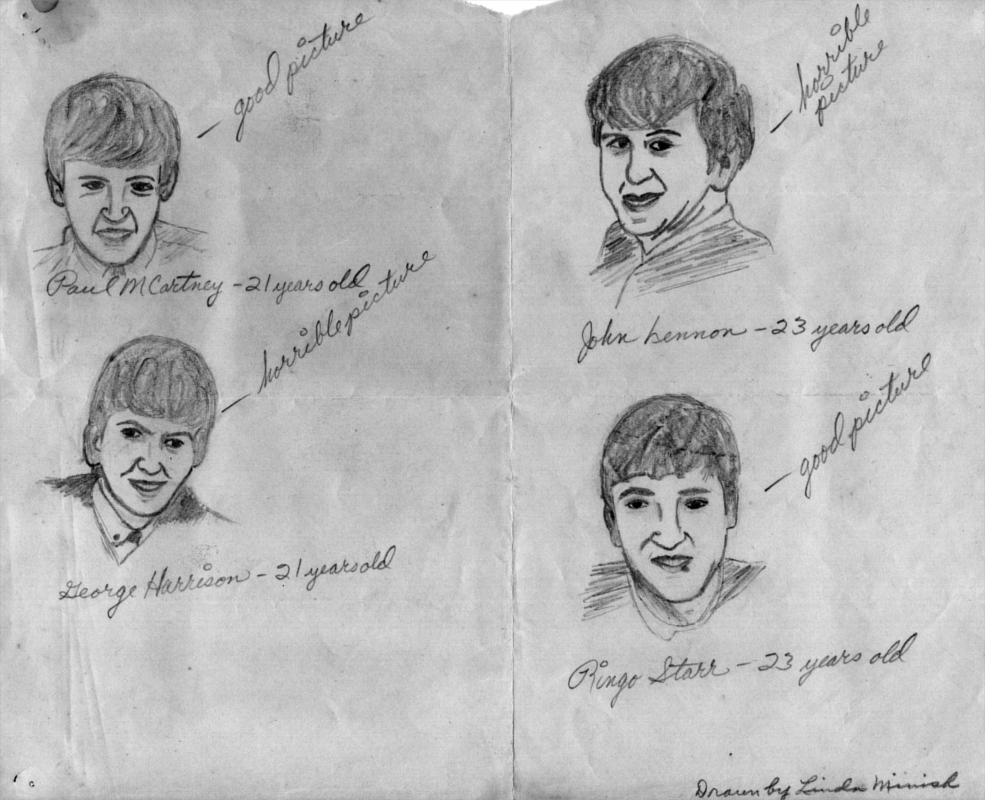 3 Replies to “A Drawing of The Beatles”