I use PaintShop Pro for most of my digital artwork solutions. It will run Photoshop plugins, making the program quite flexible. The program used to be developed and sold by JASC, but Corel took it over somewhere in 2004. They’ve done a good job of keeping it similar to the original program, yet adding state-of-the-art capabilities every couple of years, that keep it on the cutting edge of graphics software. Even if it wasn’t as good as it actually is (I love it for many reasons), the price would mandate my choice. Whereas Adobe Photoshop costs about $250, Paint Shop Pro (which is also often bundled with other, related software) usually runs about $99 for the Ultimate version. I usually wait until it’s been out for a year or so, and buy the version that’s just going out, as they develop the next version. The version I am running right now is Pro 2020 64-Bit, which means I also own the 32-bit version, because when you buy the 64-bit version, they include the 32-bit one free, which is cool.

I started working with PSP’s brushes, trying to implement them in similar ways that I would wield actual paintbrushes, back in 1998 or so, on my Macintosh computer, shortly before the move to Corel was accomplished. Here are a couple of paintings I did. Keep in mind that I was still learning to actually do wet-on-wet painting, so one way or another, these paintings are pretty primitive. Still…I had fun making them, and I’ve kept them all of these years.

WILDERNESS…
This was my first effort at this type of image creation (in 2002), though I had been using PSP since 2000, I think. I was trying to get some distance effects, blended clouds, a sky providing a focused light, reflections, and things like snow on the mountains, running water, grass and trees, rocks, and reflections in the water. I was fairly pleased with that, and also with the fact that it has the basic look of having been actually painted on canvas. It was actually quite hard to achieve anything approaching brown, so I was pleased with that, as well. Not a single part of this was copied from anywhere. It was completely painted with the appropriate brush strokes, and layered only by using blending techniques…not by using actual layers (which I learned to do later). 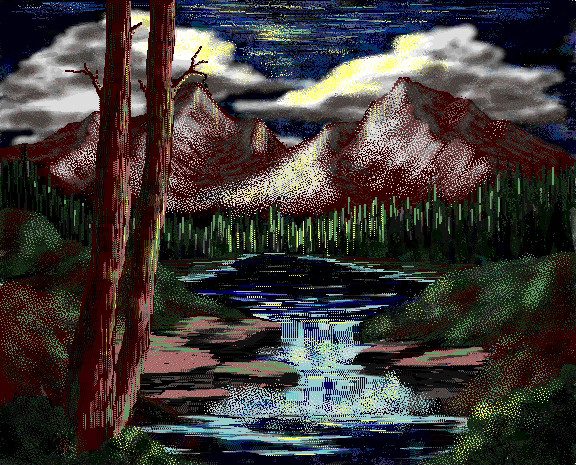 ALASKA WATERS…
When I decided to do this painting (in 2003), I had been looking at an Alaska Magazine (to which I subscribed for many years, after moving away from Valdez) and had seen a photograph that looked somewhat similar to this painting, except with more detail. I was using the last version of PSP by JASC that I ever owned, as the following year Corel took it over. However, I had moved to my first Windows  computer (which I purchased when I could no longer afford the newer versions of Macintosh…sigh).

My purpose for creating this (other than the inspiration from the magazine) was to use it for a background for a website page I was working on. So I didn’t add any more detail than you see here, because I needed it to remain soft and muted, yet have enough depth to show that the mountains in the background were much further away than the 12 other land masses that would appear as you traveled forward along the waterway that winds along all of the shores. The mood was also supposed to express a slightly foggy, yet warming early morning. No foliage was added on purpose, as it was the landforms and the still, still, deep water that I wanted to represent. I still am pretty pleased with the result, that once again, was achieved only by using the available brushes built into that particular Paint Shop Pro version.

I just did a search for this type of a real Alaskan Scene. If you check out THIS LINK, you can see that I really did a pretty good job, though without the detail in the photograph. 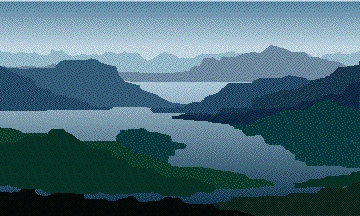